During their research trip to Timișoara, Peles Empire were inspired by two narratives they came across. One relates to a small statuette in a temporary exhibit at the Banat Museum. The figurine from the iron age was discovered in the commune of Topolovăţu Mare during preventive archeological research conducted by the museum’s staff —specifically Răzvan Găvan—on the construction site of the future BRUA pipeline, an interconnecting gas system within the region. Appearing in the extra-Carpathian Dacian area to which the work’s title makes reference, the role of these items remains debated among experts. Based on the visible marks  and incisions on the figurines, it is deemed they were used in the practice of magic, with the clay figurine being thrown into fire. When clay is being fired and hardened, it can survive for thousands of years. Another anchoring point of their work, was a walk in the city conducted by Tur de Arhitectură where discussions of the Ottoman history of the city and its invisible traces emerged as dwellings and vestiges of that era were burnt down. In both disparate narrative, fire plays a central role at the intersection between acts which destroy and those which create life.

Specific to their practice, Peles Empire approach history as a malleable material through a process of abstraction and copying which withdraws images from their original context. The artists created a new photomontage, mixing photographs of the found figurine and photographs of art materials from their studio with images of Peles Castle’s various “Moorish Salon” interiors as well as the “Turkish Salon” designed in an Oriental manner. Fashionable in many European countries at the time, such interiors were “reimported” or, rather, “copied” for Romania’s first king, Carol I, and represent a counterpoint to the original Ottoman traces erased in Timișoara a hundred years before. Printed on A3 color copies, the images are pasted together creating a vast floor work in one of the arches of Bastion Theresia, the largest surviving part of the fortification system built by the Habsburgs. The same space which was recently used as a music bar called Jazzissimo turns into a vast archeological site and cultural palimpsest. AR

Peles Empire’s work for the Art Encounters Biennial was possible with the support of Institut für Auslandsbeziehungen (ifa) and Goethe-Institut București.

In 2005, Peles Empire began their collaboration by opening an illegal bar in Frankfurt’s red light district. The space featured wallpaper made of A3 color copies reproducing, nearly to scale, a room from the 19th Century Peles Castle, located in the foothills of Romania’s Carpathian Mountains. Peles Castle is a castle of historicism as each room is a copy of a different architectural style. That these rooms were built by skilled local craftsmen with little knowledge of the original style or techniques, produced a very specific form of mistranslation, representing a pre-industrial simulacra, which appears to anticipate postmodernism nearly one hundred and twenty years before it started. The same act of copying or translation that birthed the Peles Castle carries over to the artist’s own approach to studio production. What is realized in three-dimensions for one exhibition, becomes the two-dimensional source material for the next period of production. Peles Empire explores the possibilities of illusion with new works that use Jesmonite, carpet, rope, and UV printing. The transition of material from 3D to 2D is simultaneously the content and material for their work. Carpets printed with scenes from the studio—a trompe-l’œil effect of arrangements paused in mid-production—are works in which the by-product of one phase of production becomes the integral content for another work. The process becomes, temporarily, the work. The act of copying is more important than the copy itself. (Oliver Osborne) Selected exhibitions: THE SKY OPENS TWICE, Künstlerhaus Graz (2019),  NOW, Scottish National Gallery of Modern Art, Edinburgh (2019); CLEOPATRE, Suprainfinit, Bukarest (2019), GRID/2 Swiss Institute,New York (2018), REMNANT, Kasseler Kunstverein (2017), Skulptur Projekte Münster, Münster (2017); GRID PRODUCTION- Made in Germany 3 Kunstverein Hannover (2017), MUTANT SALTS, Basel (2015), EVER BUILD GAK Bremen (2014) 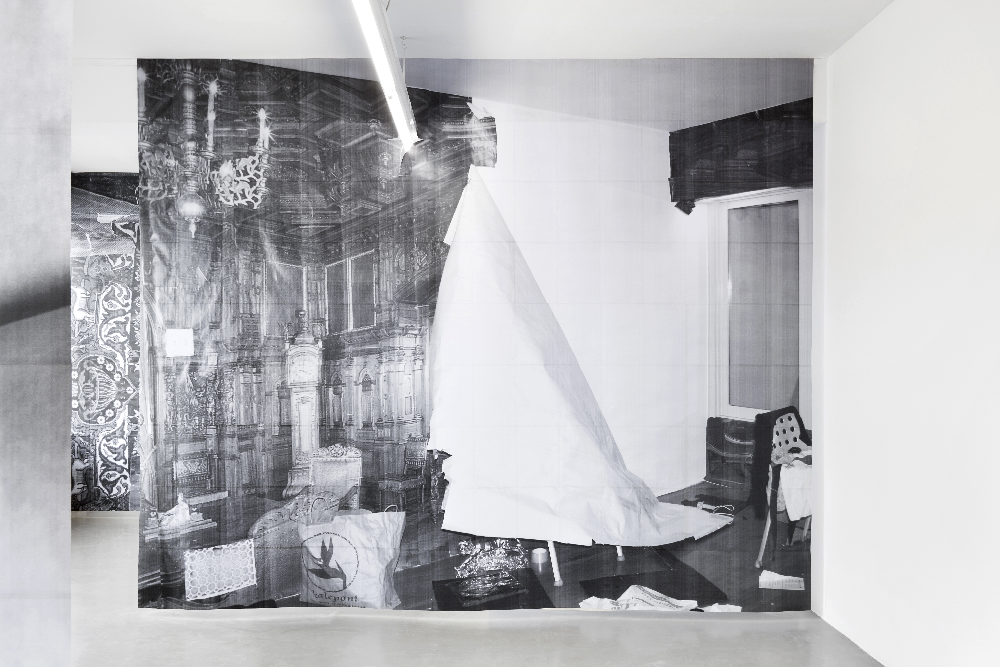