“Homes for surviving common problems are not as common as problems themselves” reads the text on STEALTH.unlimited’s big ad covering one side of a block of flats on Take Ionescu Ave. in the center of Timișoara, made in collaboration with graphic designer Katarina Popović. This avenue is also the address of one of the biggest housing developments in the city, ISHO, and the Art Encounters Foundation, founded by Ovidiu Sandor who is, at the same time, the CEO of ISHO, and an influential collector on the Romanian art scene. Pursuing their long-term engagement with issues around housing, here, STEALTH are picking up on the way housing is increasingly commodified into a product to buy and sell on the prosperity ladder, with related mortgage-fuelled housing bubbles, household debt, exclusion and the way banks and real estate companies are creating an image of housing as a way to realize yourself. But instead of treating housing conditions as a question of lifestyle and ‘career’, they point to the vulnerability of the domestic sphere, with a broken egg in a tight egg carton.

Having met with a number of local organizations in the areas of housing, rights to the city and gentrification, and having taken into consideration the genesis of the Art Encounters Foundation including its entanglement with these issues, STEALTH’s biennial commission also addresses the fact that in Romania—and most other countries in this part of Europe—two thirds of the population are having difficulties paying for their current housing. By hijacking the space of commercial ads, they bring to the fore questions of investment and speculation, as well as the need for deep re-thinking on housing in the wake of automated labor, migration patterns and climate change. Finally, the title of their contribution, ADVANCED COMMUNITIES. You’re Almost Home reveals where they seek a way out: in setting up a novel wave of co-operative owned, resident driven housing developments that defy speculation and, instead, provide a secure home. ML

STEALTH.unlimited is an internationally active spatial practice formed in 2000 by Ana Džokić and Marc Neelen, based in Belgrade and Rotterdam. STEALTH’s work is situated between future fiction, spatial intervention and the politics of possibility. During the last decade, Ana and Marc co-initiated and are active in Who Builds the City (Belgrade) and City in the Making (Rotterdam), two long-term, community-based engagements, dealing with the unsustainability of the current housing condition. Their collaborative practice-based PhD at the Royal Institute of Art, Stockholm, concluded with the book Upscaling, Training, Commoning (Jovis Publishers, Berlin, 2018). Within their curatorial and research projects, STEALTH has done numerous exhibitions and publications at a/o: the Dutch Pavilion, Venice Architecture Biennale (2008); Tirana Biennial (2009); Impakt Festival Utrecht (2010); Evento Bordeaux (2011); Cittadellarte/Fondazione Pistoletto (2012); Vienna Biennale (2015); and Zagreb Salon (2018). 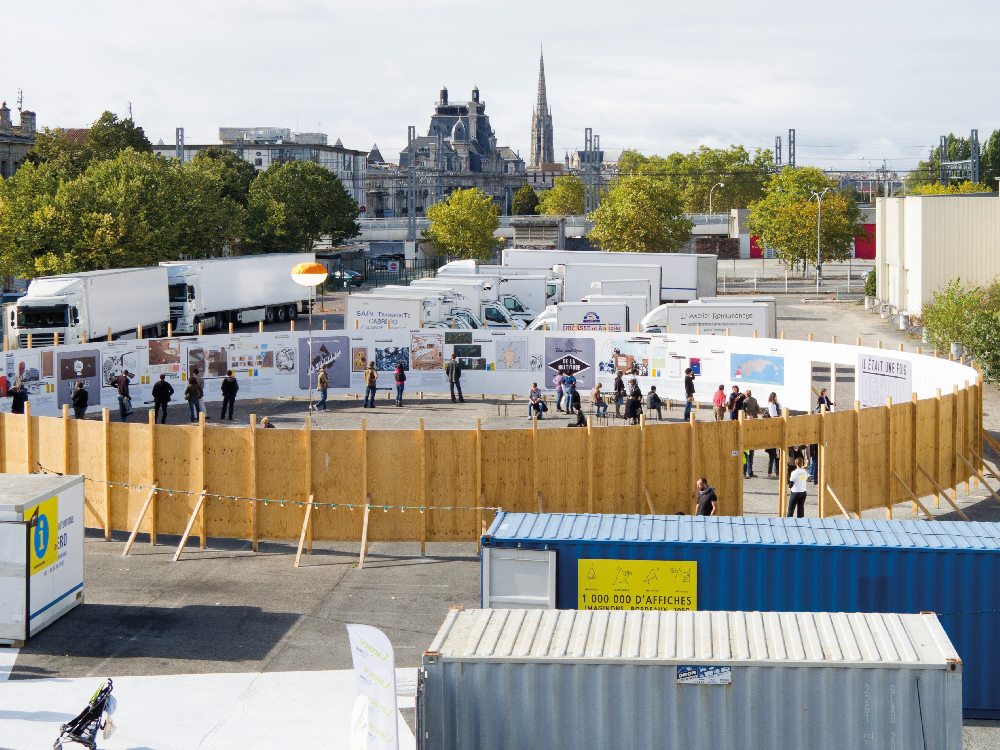 STEALTH.unlimited, Once Upon a Future (with Emil Jurcan and the architecture center arc en rêve), as a part of Evento 2011, Bordeaux, courtesy of the artists