Ciprian Mureșan’s commission for the Art Encounters Biennial 2019 draws attention to some fundamental questions regarding the process of art making. One has to do with originality, explored in numerous projects by the artist where the process of copying evolved into a consistent artistic method. Through meticulous hand-drawing replicas of material from canonical art history, Mureșan highlights how the act of reproduction mediates our relationship with culture, and is inherent to the act of creation.

Interested in the typology of the plague column, very common in the Baroque era, the artist drew attention to Timișoara’s Monument of the Holy Trinity. Known as The Plague Column, the statue was commissioned by the counselor of the local administration, Johann Anton Deschan Hansen, built in Vienna, and installed in Timișoara in 1740 in Saint George’s square before being moved in the 1970s to its current location in the middle of Union square. Two years earlier, Timișoara was devastated by plague and such a monument aimed at commemorating the violent pandemic, while also reinforcing faith in the Catholic church in response to the Protestant reformation. The model for this type of monument was The Plague Column in Vienna which was replicated in local variations of the baroque. Mureșan’s replica is a radical transformation of the original column. Made out of resin with fiberglass, with an opaque, grey surface that resembles cement, the column lies down on grass as a relic from an uncertain time and place. Whereas, conventionally, such monuments marked city’s power center, Mureșan’s work is decentralized at the outskirts of Timișoara, in Soarelui neighborhood, one of the last working class districts built in the ‘80s. A figure emerges and is reproduced on the column, revealed to be a plaster mould that the artist made after Oscar Han’s monumental portrait of Mihai Eminescu, an influential Romantic poet from Romania. The multiple repetitions of Eminescu’s imposing portrait echoes the mechanisms in myth-making. Folded and attached to the column are several dense pencil drawings by the artist. Using the support of a light box, the artist reproduced to-scale illustrations from four books documenting the public monuments in Timișoara. Exposed to the outdoor conditions, both the drawings and the column will deteriorate over time. They are not meant to last, and why should they? is ultimately the question the artist is raising. AR 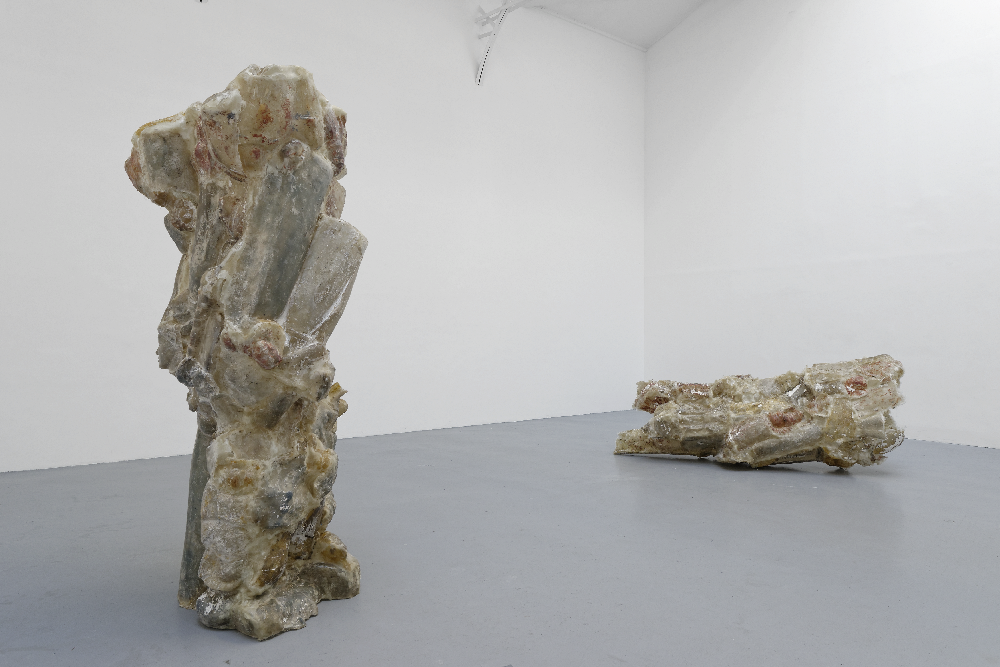