In the end, there will be no more Romanians, Hungarians, Serbs, Germans, Romanies, Bulgarians, Ukrainians, Slovaks, Jews, Turks or any other nationalities, only the unity of life. This utopian statement by Vilmos Koter instigates conflicting views across the political spectrum. In the format of a poster designed by the artist, this intriguing message is distributed in different locations across the city dedicated to graphic announcements, managed by the local public authority. The work is a recontextualization of At the end… a previous project by the artist where the simple message At the end of the day we all go to sleep was translated and presented in public spaces in a different language than of majority. A true fact for all became accessible and understandable only by a few.

Reflecting further on the workings of language in the multicultural and multi-ethnic city of Timișoara, Koter translated his message on the unity of life in ten languages historically spoken in Banat. For each version of the poster, the artist mixed all the ten languages in a unitary way generating a plurilingual statement. The process of composition is based on an equal exchange of words across the languages in use. In each poster, half of the text is stated in one specific language with the sentence being completed out of the remaining nine. The final result of the poster series is a balance between majority and minority. Each language is dominant in one instance while it borrows the same amount of words as it gives back. The numbers of the posters corresponds to the order of each ethnic group listed in the statement. Once again, the content is true for all, but remains unreachable for many producing a state of discontent. According to the artist: “the text was informed by the fear of losing political and national identity which is believed to be connected and determined by the language. This fear from a future that there will be no more nations, only humanity, appears in many texts that propagate nationalism, or conservative beliefs about the structure of societies based on territorial and ethnical affiliations.” AR

Vilmos Koter (b. 1982, Miercurea Ciuc/Csíkszereda) graduated from the Art and Design University of Cluj. He had several exhibitions in various countries, including India and others, and he participated in the Geumgang Nature Art Biennial in South Korea. He took part in debates and group exhibitions at Magma, tranzit.ro, Bozar, HAU Berlin, and in art residencies and camps, such as those in Lăzarea, Wongol, Guestroom in Maribor, and Žagare. He collaborated several times with the AltArt Foundation, and he was a member of the Balkan Caucasus Collective. His works research and critically re-interpret aspects of social and political life, but also those of the everyday universe, in the form of art interventions in public space, performative acts, installations, and graphic design. Selected exhibitions and projects: Future Museum, Czech Centre, Bucharest (2018); Parcul Feroviarilor, Altart, Cluj-Napoca (2017); Žagarė Fringe Festival (2017); tranzit.ro, Bucharest (2016); Caucasus–Balkan Express, Bozar, Brussels (2016); Caucasus–Balkan Express, Ljubljana (2015); HAU, Berlin (2014); Temps D’Images, Paintbrush Factory, Cluj-Napoca (2014); Magma, Sfântu Gheorghe (2014); 53 Art Museum, Guangzhou (2013); Geumgang Nature Art Biennale, Gongju (2012); Korkép, Lăzarea (2011); Art-Mill, Szentendre (2009); Partapur, Banswara (2008); Masca Theatre, Bucharest (2006). 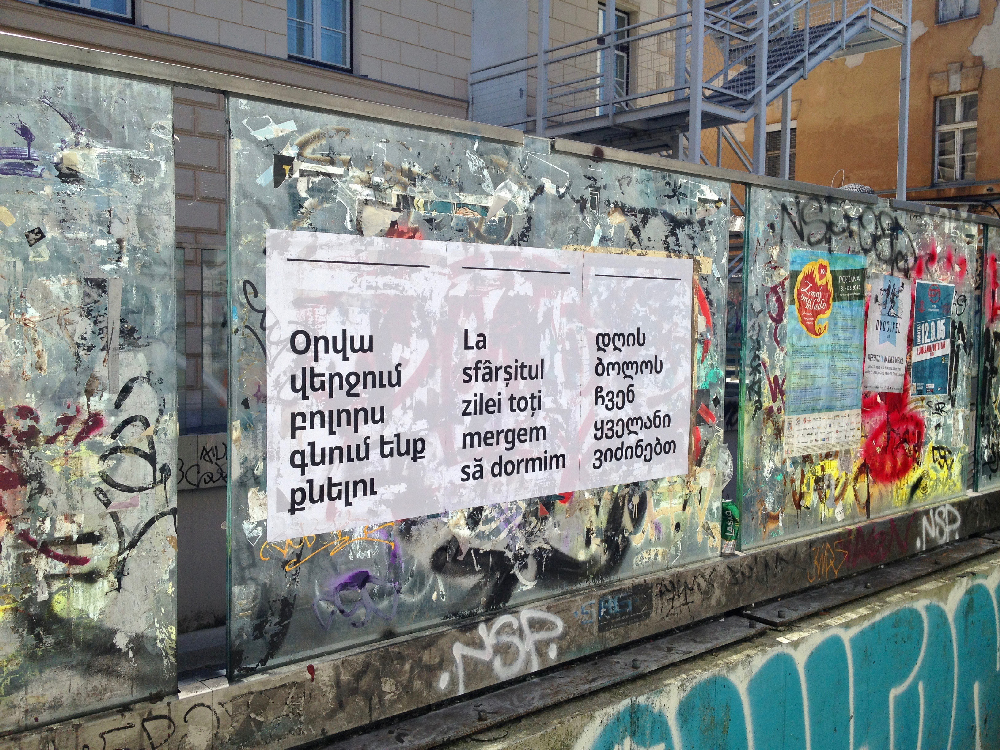