The Long Duration of a Split Second

Shortly before dawn on 18 January 2017, police raided the Bedouin village of Umm al-Hiran. During the raid, two people were killed: a villager, Yakub Musa Abu al-Qi’an, and a policeman, Erez Levi. Israeli officials described the death of Levi as a “terror attack”, and suggested that al-Qi’an was connected to the terrorist group ISIS. But local residents and activists told a different story: police had fired at al-Qi’an without provocation. Since 2017, Forensic Architecture (FA) has worked with a group of documentary photographers, Activestills, to examine these claims. Their work pitted them directly against Israeli politicians and police chiefs, and ultimately exposed glaring inconsistencies in the official account of the event. The investigation is still ongoing, as FA supports efforts to re-open the official investigation into al-Qi’an’s death. The montage-like video The Long Duration of a Split Second combines images from a variety of sources, from mobile phones and film recordings made by a member of the photography activist collective Activestills to footage from Al Jazeera. The “split second” refers to the brief moment security forces have to make a judgement whether someone is a terrorist or not and take action, and then not being held responsible for errors of judgement.

The premise of Forensic Architecture is that analyzing violations of human rights and international humanitarian law (IHL) in urban, media-rich environments requires modelling dynamic events as they unfold in space and time. These techniques allow FA to present information in a convincing, precise, and accessible manner—qualities which are crucial in the pursuit of accountability. The techniques of architectural analysis also enable them to generate new insights into the context and conduct of urban conflict. Combining these novel approaches, they have built a track record of decisive contributions to high-profile human rights investigations, providing forms of evidence that other methods cannot engage with. ML

Forensic Architecture (FA) is a research agency, based at Goldsmiths, University of London. We undertake advanced spatial and media investigations into cases of human rights violations, with and on behalf of communities affected by political violence, human rights organisations, international prosecutors, environmental justice groups, and media organisations. ‘Forensic architecture’ is the name of an emergent academic field we have developed at Goldsmiths. It refers to the production and presentation of architectural evidence—relating to buildings, urban environments—within legal and political processes. Our work often involves open-source investigation, the construction of digital and physical models, 3D animations, virtual reality environments and cartographic platforms. Within these environments we locate and analyse photographs, videos, audio files and testimonies to reconstruct and analyse violent events. We also use our digital models as tools for interviewing survivors of violence, finding new ways to access and explore memories of trauma. 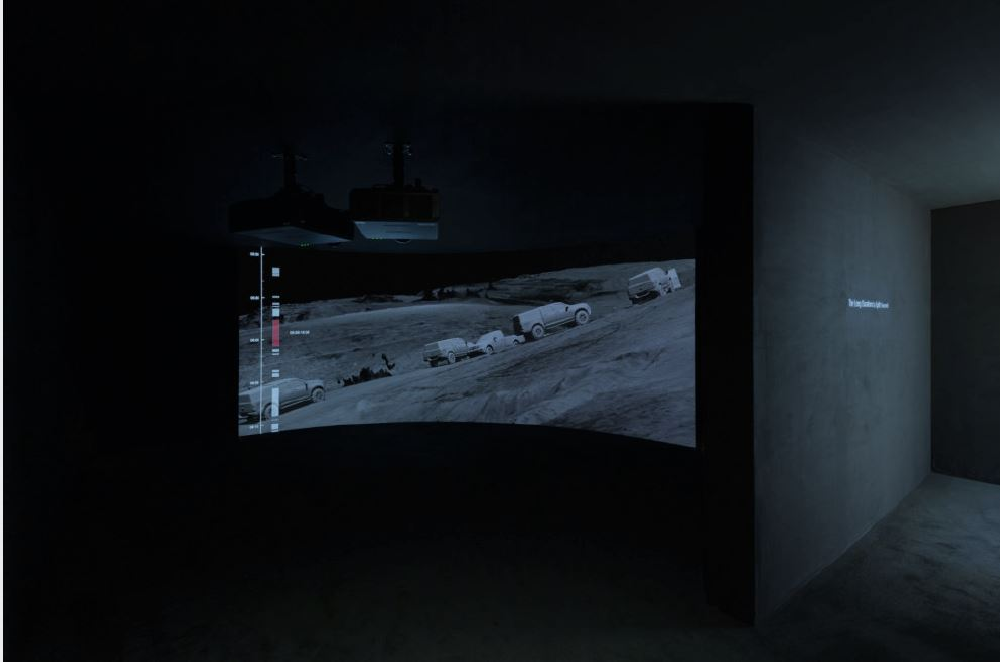 Forensic Architecture, The Long Duration of a Split Second, 2018, video installation on a curved wall, courtesy of the artists