Impossible Floral Fountain, Black River Hologram, Peripheral Projection Pillar, Looming and Blood Stream Missile are handmade collapsible sculptures made of silk mohair yarn dyed with Kool-Aid, curry, office printer ink, birch leaves, among others. Suspended from the ceiling, the light and slightly hairy macramé-like structures combine shapes from the high-tech space age with those from the handicraft methods especially popular among women. They are a manifestation of resourcefulness as a playful attitude—one bundle of yarn is enough for an entire sculpture, resulting in sculptures which are, at one and the same time, voluminous and see-through. Using objects and materials which are already there or can be readily found, and oftentimes including an element of surprise, Bella Rune has a keen eye for the everyday and the mundane. Kool-Aid is for example a “poor man’s” soft drink, a powder which is mixed with water. While visiting Timișoara earlier in 2019, the artist noticed the presence of the colors green and violet, and hence it is palpably present in the new yarn sculptures.

Rune often employs formal art references, albeit dressed in alternative materials, readily sourced from the clothing world. The works create bridges between various spaces and worlds, between the forest and the smartphone camera, between digital space, DIY and the gallery room, between modernist sculpture and folklore. Creating through the agency of art, alternative forms of meetings and possibilities are central to Rune’s practice. Her works challenge routine modes of vision and patterns of movement and require that the viewers move both mentally and physically in new ways, while challenging common-sense behaviors and views.

For the work Konsekvensanalys (Impact analysis), Rune has used textile surfaces which are typically employed in marketing, such as tote bags, banners and caps, as well as napkins and placemats. This time, it is with T-shirts, postersand placemats with fountains as a motif, classical meeting points, printed with images which, together with the digital image produced by the app, refer to the attractions and traps in the seemingly frictionless social media “communities”. There is, for example, a keyboard together with a wolf, an image of statistics together with a “troll” and a bodybuilder with hamburgers on a grill. While smartphones have become bodily extensions of sorts—devices which both connect us to the outside world near and far away while catering to personal passions—this work relies on a specific downloadable app which augments reality. The app makes the phone function like a scanner, detecting a virtual reality which is otherwise invisible. The physical object and the people in the space with handheld devices and the 3D animation, together, create the artwork. In this way, hidden messages can be found within objects and views which seem perfectly normal, a tactic which has often been used as a way to protest, for example, against dictatorships. ML

Bella Rune (b. 1971, lives in Stockholm) studied at Chelsea College of Arts in London (1995–1998) and Beckmans School of Design, Stockholm (1992–1994). She works in sculpture which incorporates performative elements and experiments with different materials and techniques. In the ongoing project Konsekvensanalys (Impact analysis) she explores the interface between physical reality and a virtual world with augmented reality. The project has been displayed in exhibitions at: Stadsskogen, Uppsala (2015); Konstmuseet i Norr, Kiruna (2016); Tensta Konsthall (2018); Garage Museum of Contemporary Art, Moscow (2018); and Stockholm School of Economics (2018) as a site-specific permanent public commission. She curated the exhibition Textila undertexter (Textile Subtexts) together with Helena Selder. It was first presented at Marabouparken (2016) and later at Malmö Konstmuseum (2017). In the exhibition she made a larger installation which also served as the exhibition design. In her solo show, XYZ, at Galleri Magnus Karlsson (2019), she received great attention for her large scale sculptures using a minimum of yarn, rope and wood to combine her interest in craft, history and popular culture. Bella Rune is a professor of Fine Art and Textile at Konstfack, University College of Arts, Crafts and Design. The educational work is also an important part of her artistry. 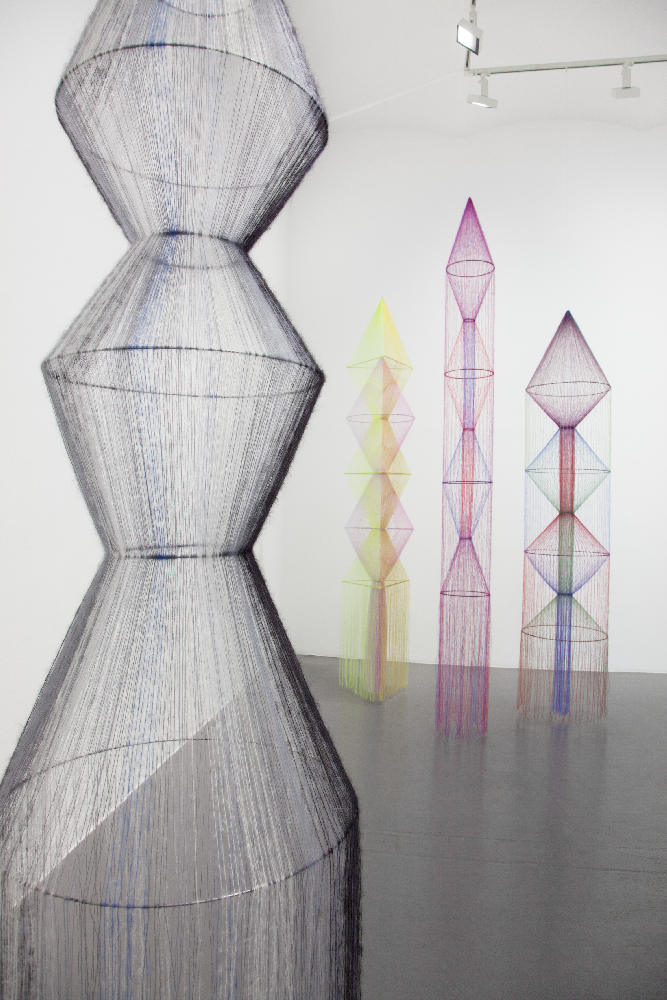